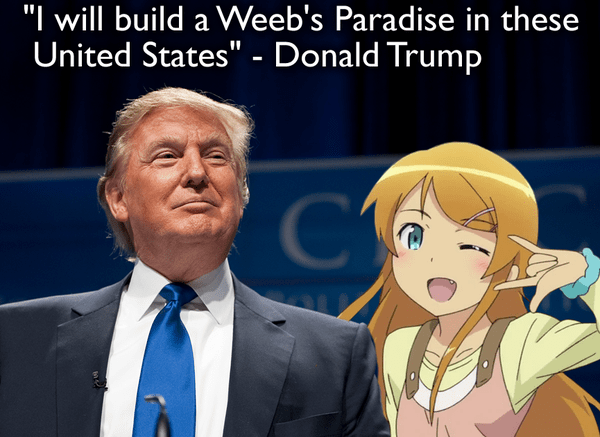 Last night on MSNBC, Rick Wilson, a GOP strategist, confirmed what everyone had been thinking in the back of their mind. Though it’s been fairly obvious by the large showing of anime hug pillows and trilby hats seen at Trump Rally’s (aka Anime Conventions), Rick said it straight up: “Alt-right Trump supporters are able to get past the sad panda and I’m pretty sure they are fapping to some doujinshi about Trump as a little anime girl.” Since we’ve had our finger on the pulse of the 2016 Election cycle, we’re able to shed a bit more insight and history into exactly what’s going on.

Trump has grown immensely as a force for contention of the GOP nomination this year. That scares a lot of people, like analyst Rick Wilson, and for good reason. Most of Trump’s growth has come from Japanese propaganda such as Umaru-Chan – Don’t Respect your Elders, I’ll One-Punch America Back to the Depression Man and Boku no Pokemon. The Japanese have been heavily influencing American politics for years through anime and they have a vested interest in seeing Trump as president. Anime fans are known for their extremist views and their ability to fap at least 3 times a day to drawn pictures of anime girls with dicks (also known as futanari) and Donald Trump is no stranger to this audience. He’s been seen time and time again pandering to this audience during his rallies. Some of his rallies feature stories told from anime girls or him quoting some of his favorite idol’s from LoveLive. “Trumpo Trumpo Trii”

Whether or not you like Trump is irrelevant though. He’s garnering so much of the Anime vote at this point, it makes sense why Bush’s advisors are scared. Ted Cruz has practically given up his campaign and Rubio was last seen taking a boat back to Cuba from Miami. Polls show Trump leading the pack for the nomination and anime is the unicorn he’s riding to the top.