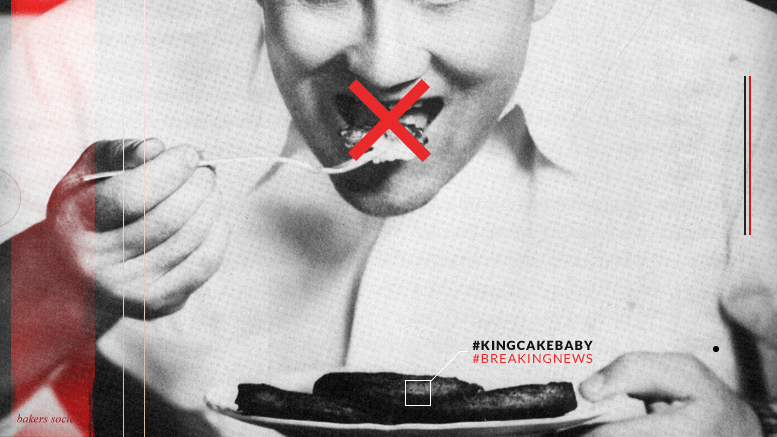 Uncomfortable news is emerging from New Orleans, LA (NOLA) today. Scattered reports on social media mention an accident involving what would normally be a historic treat for the city’s residents. Allegedly an infant was accidentally dropped into an industrial King-Batter© King Cake Kiln during a cake factory tour on Thursday. The parents had this to say:

“I held the little one over the batter mixer machine thing for a better view and suddenly lost my grip…the baby became submerged in butter, sugar, and creamy batter almost immediately. We lost sight of it after the vat of batter was sucked off down a tube. It took us over 40 minutes to get help.”

The factory owners claim the parents had decided to separate from the tour group and examine the factory on their own. Factory officials say the infant was most likely baked into a batch of king cakes which shipped to grocery stores the same day.  The accident may lead to official discussion about why the factory did not have preventative equipment in place to keep children from falling into the batter. The Preachers Parish Community Group is postponing Mardi Gras while a product recall is considered.

A Quick History of the Delicious Kingly Cake.

King cake is a classic New Orleans traditional cake with roots that reach as far back as the French invasion of New Orleans in the 16th Century. French bakers created the cake to celebrate the French victory over the city. The Mardi Gras king cake is usually baked with a small plastic baby figurine inside; a tradition promoted by the first bakeries of New Orleans. Historians point to the young bakers of NOLA starting the baby-in-cake style of baking.

After having problems with local children bothering them while they baked the delicious cakes; they began to jokingly threaten children who lingered for too long with the old baker’s adage, “Sortez de ma putain de boutique avant que je décide de faire cuire un chevreau dans un gâteau!” or translated to English as, “Get out of my fucking shop before I decide to cook a child in a cake!” A bit crude, but it’s a very French reaction.

The tradition continues today throughout New Orleans during the Mardi Gras season. Any tourists who find a plastic baby in their piece of king cake are encouraged to direct their attention to any children close by and yell the old baker’s words as loudly as they can.

Be the first to comment on "Mardi Gras Postponed in New Orleans After an Actual Baby was Baked into King Cake."