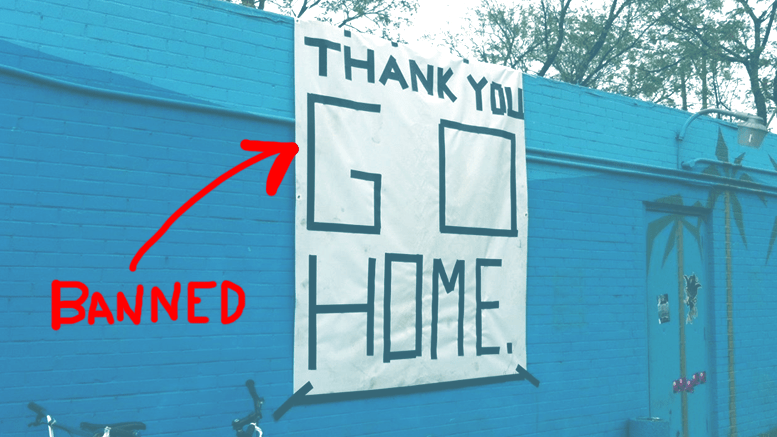 If you’re familiar with music, branding, or interactive technology, you’ve probably heard of the annual event known as SXSW (South by Southwest). This world renowned festival grew from an 800 attendee local event in 1987 to a 84,385 badge-holding attendee “advertising showcase” in 2016. Usually, near the end of the festival, local Austinites will display signs around town with phrases along the lines of “Thank You, Now Go Home.”  It’s a tradition based on the shared misery of Austin residents who must deal with the 400,000+ tourists, and the traffic associated with them, that come to enjoy the tag-along events that surround the SXSW venues.

Today, news is spreading that local representatives are considering banning the use of any “Thank You, Now Go Home” signage at any future SXSW events – starting in 2017.

“We felt that these ‘Thank You, Go Home’ signs popping up around Austin streets near the end of the festival were making our valuable festival goers uncomfortable.”

They were focused on maintaining an inviting theme to future SXSW events. “We felt that these ‘Thank You, Go Home’ signs popping up around Austin streets near the end of the festival were making our valuable festival goers uncomfortable.” They went on to say, “We were approached by a large group of attendees from a California startup… we set up a meeting to discuss why traditions such as the ‘go home’ signage could be detrimental to future events. Additionally, we discussed how Austinites could inspire a more friendly and inviting atmosphere to bring in more tourists for next year’s SXSW.”

I personally believe that the residents are simply showing their appreciation for the love of the festival and the economic boost it gives, but also sharing their opinion that this city is also “home sweet home” to many who live here. The locals who live within Austin value the unique energy the city has during non-event seasons and they want their visitors to respect that. A tradition based on preserving your community’s sanity from tourism overflow isn’t something to ban in my opinion. Leave us a comment below or tweet @dripfeed_news on twitter to tell us what you think of the potential ban on ‘go home’ signage.

1 Comment on "Austin, TX – SXSW “Thank You, Now Go Home” signs banned from being displayed at next year’s festival"